By
Web Editor
Posted in
2018, Community, History, History Month, Homophobia, News
Senator Norris made the statement, which was vigorously refuted online, at the launch of the LGBT History Festival ‘OUTing the Past’ at Belfast City Hall on February 16, reports Belfast Telegraph.Speaking to the assembled audience about the change in attitude around LGBT+ acceptance that has taken place through the decades, Senator Norris remarked “I remember when the Provos were kneecapping people for being gay”. 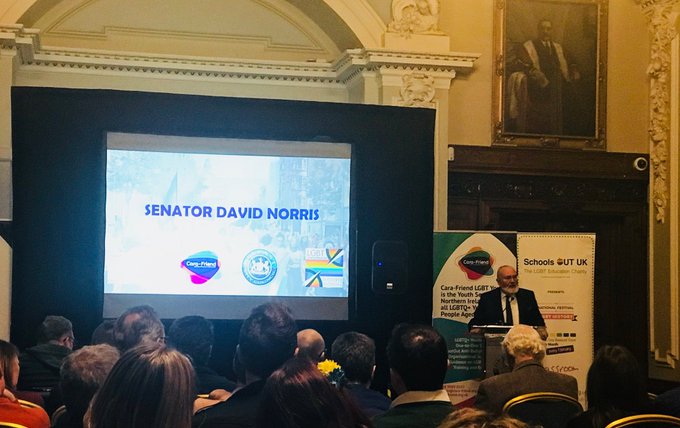 This comment was circulated on Twitter by journalist Johnny Caldwell and was quickly refuted by a number of users. “David Norris; What you said is a complete and utter lie. It’s as simple as that. You should retract and apologise,” tweeted Caitlín Uí Ceallaigh.
“Otherwise, you should provide a list of the victims for verification of your yarn!”
Others stated their “disappointment” in the senator, citing a piece from republican publication Án Phoblacht. “Lesbian and Gay groups supported our Hunger Strikers when David Norris says gay people were being kneecapped,” tweeted Nicola King. “I’ve always liked David Norris. Disappointed in him.”

Senator Norris later clarified his remarks in a subsequent interview in the Belfast Telegraph.”Sinn Fein have in recent years transformed their opinions – they have been very vocal and very supportive and it’s a good thing and I welcome their progressive stance,” he said.
“But I remember the darks days as it were and the first thing I should says is I was talking about 30 years ago, or more.”
“I can only go on what I know and I have a very strong recollection of people coming through Dublin, from Derry to get to London and we helped them.
“They wore badges, which said in Irish ‘gay liberation’ and they had been bullied, intimidated and yes, kneecapped. They were frightened and they had to leave.
“Now, I don’t know if those behind it may have been acting as freelance but at that time the provisional movement was very anti-gay. And indeed I remember people who were in the provisional movement shouting homophobic remarks at me.
“But people were beaten for being gay.”