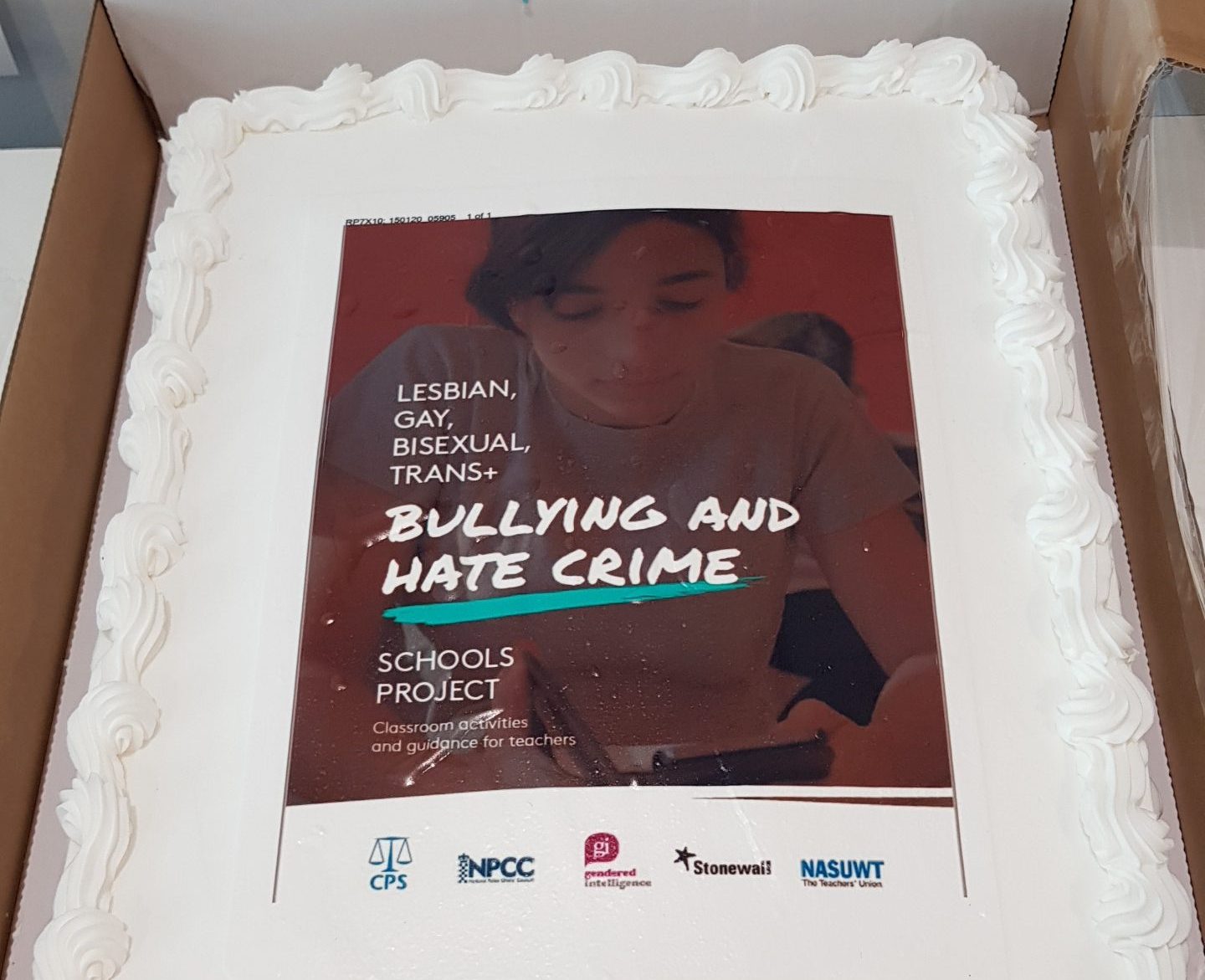 The primary author of the new pack, Berenice Miles, along with Schools OUT UK, Stonewall, Gendered Intelligence, NASUWT and several individuals including Denis Carney and Joshua Garfield, the staff and students of Thomas Tallis school under the guidance of Stacey Stanhope (the senior policy advisor of CPS) produced this ground breaking essential guide to prevent and deal with homophobia.

Berenice has worked tirelessly over the years tackling hate crime and has also worked on CPS packs for schools dealing with racism and disability. The pack is comprised of lesson plans, PowerPoints and films illustrating how homophobic hate crime affects young people and how they believe it should be dealt with. It is designed so that any teacher can use it with ease. The pack is particularly timely given that the RSE curriculum is coming in September, noted for its inclusion of LGBT+ issues.

The pack is digital only and can be found at https://www.cps.gov.uk/hate-crime-schools-project-lesbian-gay-bisexual-and-trans-hate-crime. The original pack was used by many schools, but required updating due to changes in legislation and the growth of cyber bullying. We hope you will find it to be a valuable asset in preventing homophobic bullying, and with LGBT+ History Month only a few days away, we are sure you will want to take a look.

20 years ago Sue Sanders was part of a small group who set up the first LGBT+ IAG To The Met. It was in response to the bombings in Brixton, Brick Lane and the Admiral Duncan pub. Commander John Grieves had already recognised he needed lay advisors after the Stephen Lawrence report and after the bombings recognised an LGBT+ group would be valuable. Sue along with Kirsten Hearn, Linda Belis and Simon Hastings were determined to get a diverse group of LGBT+ people who could speak with passion and authority on diverse LGBT+ issues, remaining aware that the black and or disabled LGBT+ persons experience would be different as well as impacts of class, gender, and religion. The IAG has spent many 100s of voluntary hours working with the met police to support the creation of a better service and meet the needs of those who are victims of it at risk from homophobic crime. The group worked with Cressida Dick before she became the Commissioner and she was at Scotland Yard for the event to thank the volunteers and the members of the LGBT Police Staff Grouo who have also worked with the group and ensured there are LGBT Advisory Police Officers in every borough.

While reporting has gone up prosecutions have gone down. However, often the targets of crime only want to report and do not always want to proceed to prosecutions. This does not mean that the police can’t do better to prosecute perpetrators and support targets more effectively. It is however no small thing to see such crucial work being done in partnership with lay experts in the field and members of the criminal justices system. It bodes well and we can only hope that it will mean a reduction of homophobic crime and increased confidence to report when it does occur.