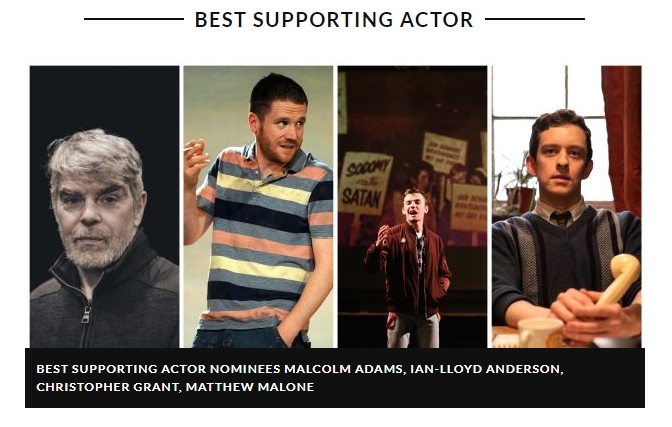 As part of OTP 2019, Schools OUT UK’s Dr Jeff Evans commissioned a play based on events in Ulster’s LGBT+ history that he witnessed first hand. It has earned actor Christopher Grant who plays Michael a Best Supporting Actor nomination at the Irish Times Irish Theatre Awards 2020.

In 1982 homosexual conduct between men aged 21 or over was decriminalised in Northern Ireland, 15 years after similar laws had been passed in the rest of the United Kingdom. Strident opposition erupted, not least from the unholy alliance of the Democratic Unionist Party and the Catholic Church, which respectively branded same-sex relationships sinful and abominable. Groundbreaking though the reform was, however, its narrow legal confines left many individuals vulnerable and exposed to the risk of prosecution.

Months later, in solidarity with its Belfast counterparts, the National Union of Students’ annual lesbian and gay conference crossed the Irish Sea for the first time. Its Irish welcome took the form of a Save Ulster from Sodomy demonstration at the gates of Queen’s University.

Under Paula McFetridge’s watchful direction, Kabosh theatre company has premiered the play in the very place where a landmark event unfolded during that turbulent weekend. In those days Belfast was shared by all manner of social outcasts: gays, lesbians, political activists, punks, rockers, anarchists. Against a rousing contemporary soundtrack, Conleth White’s retro-tinted imagery evokes the spirit of the outside world, while the central characters represent a vivid composite of the conference delegates.

Affable Mancunian George (Brendan Quinn) is spooked by terrifying encounters with soldiers and gay-bashers, only then to be warmly embraced by punters at the social club, in republican west Belfast, whose management had invited the beleaguered students to the Saturday-night céilí.

At this point the writing swiftly switches from lengthy exposition to snappy repartee. In a revealing exchange, Margo comes under close scrutiny from a local man, not because she is a lesbian but because she lives in London, the disreputable city to which his teenage daughter intends to move. The tonal change works a treat, winning hearts and prompting emotional first-hand memories of a small but significant moment in the city’s LGBTQ+ history.