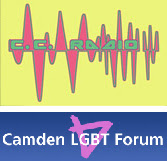 In February 2007, the Camden LGBT Forum organised an event for almost every day of the month. Ben Cooper of the Camden Community Radio went along to the official launch of History Month in Camden, “Out in Camden 3”, on 12 February. There he met up with the organisers and some of the guest speakers.

Keith Moffitt, the first openly gay leader of Camden Council, who opened the event talked to Ben about his experience as an openly gay man in politics.

Sue Sanders, co-chair of LGBT History Month and originator of the Month, explained how she got the idea of the Month and what she hopes to achieve through it.

Lou Hart, director of the Camden LGBT Forum, reminded Ben of the importance of celebrating our history which is too often hidden or lost.

Trainee Detective Constable and Community Safety Unit Officer for the Met Police, Emma Whitehead told of her personal experience both inside and outside the Force and encouraged people to report any hate crime they might be victims of.

Neil Mckenna, author of The Secret life of Oscar Wilde, recalled an encounter with prejudice when working as a journalist while Lindsay River, project coordinator for Polari, talks of society’s reluctance to recognise that older people (straight or gay) can have sexual desires and of the lack of awareness with carer that there is such thing as older LGBT people.

Lou Hart concluded the programme by highlighting some of the 32 events forming the Froum’s contribution to LGBT History Month 07 and the biggest programme of events in the country.