>Even six years after the event, the terrorist attacks on the New York City and Washington are still having repercussions in many countries around the world. Even today, the American Congress is holding a hearing on the developments of one of the two wars which are consequences of those attacks and they are one of those world events where most people remember clearly where they were and what they were doing at the time.
Many lives from all sections of the community (people of all ages, nationalities, creeds, age, gender and sexual orientations) have been touched or irrevocably changed as a result of that day of September 2001. Hundreds of thousands of people have died during those 6 years and, unfortunately, more will yet die.
Two of those lives, crushed on the day itself, signify particularly for the LGBT community, although no doubt many other members of this community have been impacted.
Mark Bingham, 31, was the director of a PR company. He was on flight 93 which crashed in the countryside outside Pittsburgh. Mark is believed to have been part of the group of passengers who foiled the high-jackers’ plans and made the plane crash where it did and miss its target. Mark Bingham was also a keen rugbyman and an international competition predominantly for gay and bisexual men and women, the Bingham Cup, has been held to commemorate his name since 2002.
A book and several films have been released about the events on flight 93 and Bingham has received several posthumous awards for his courage. 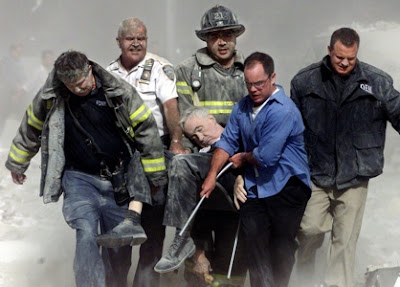 Father Judge’s body being rescued. This now iconic picture by Shannon Stapleton has become known as The American Pieta.

Father Mychal Judge, 68, was a Catholic priest, the chaplain of the Fire Department of New York. On September, 11th, he followed his colleagues to the site of the World Trade Center to provide spiritual support to the wounded and dying. Father Mychal was killed when the buildings collapsed. He became the first officially recorded victim of the attacks. His life had been dedicated to helping the marginalised and he was a long-term member of Dignity, a Catholic LGBT activist organisation. This in defiance of the Catholic Church’s hierarchy; the subject of Father Judge’s sexual orientation remains controversial.
In 2006 a film, The Saint of 9/11, directed by Glenn Holsten and narrated by Sir Ian McKellen, was released, celebrating Father Judge’s life. The film includes testimonies of work colleagues and people who met him at different stages of his life.
About Mark Bingham:
* Mark Bingham on Wikipedia
* Tribute website to Mark Bingham
* The Bingham Cup
About Father Mychal Judge:
* Father Mychal Judge on Wikipedia
* The Saint of 9/11