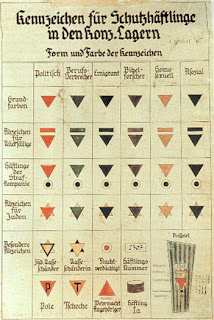 After many years of campaigning by various LGBT organisations (such as le Mémorial de la déportation homosexuelle, les Flamands roses, l’Inter-LGBT or Homosexualités et socialisme), France is about to take another step towards the recognition of the deportation of homosexuals during the Second World War.
On 26 avril 2001, the then Prime Minister, Lionel Jospin, in a speech, finally made mention of the ordeal undergone by an estimated 5,000 to 15,000 people. In 2003, Pierre Seel, the only French man to have spoken out about his experience as a gay man, received official recognition as a victim of the Holocaust by the International Organization for Migration’s program for aiding Nazi victims.
In April 2005, the President of the Republic, Jacques Chirac, during the “Journée nationale du souvenir des victimes et des héros de la déportation” (the French equivalent to the Holocaust Memorial Day – last Sunday of April), also mentioned this sad episode, saying: “In Germany, but also on French territory, men and women whose personal lives were set aside, I am thinking of homosexuals, were hunted, arrested and deported.”
Yet many local LGBT organisations are still regularly prevented from taking part in official ceremonies, sometimes violently. Most of the time they have to wait until the end of a ceremony to lay their own wreaths.
Now, Alain Marleix, Defence State Secretary in charge of War Veterans, has given his support for a commemorative plaque to be unveiled next year on the Wall of Remembrance at Struthof concentration camp. The idea still requires agreement from the executive committee of the camp made up of former inmates and victims of deportation.
The Struthof camp was the only concentration camp built in France. Their were however also internment camps. Pierre Seel, after being arrested and tortured because his name was on a police list of homosexual, was sent to Schirmeck-Vorbrück where he had to witness the death of his lover when German soldiers deliberately set dogs on him. Seel was later forcefully incorporated into the German army and sent to the eastern front. 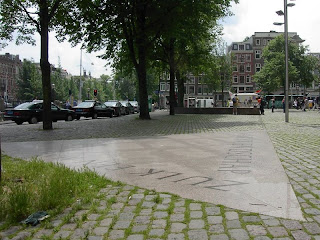 Hussein Bourgi, chairman of Mémorial de la déportation homosexuelle (MDH), congratulated himself on this welcomed support from the minister for this long held demand of his organisation, of which Seel was a member until his death in 2005.
After the war, the treatment of homosexuals in concentration camps went unacknowledged by most countries, and some men were even re-arrested and imprisoned based on evidence found during the Nazi years. It was not until the 1980s that governments acknowledged this episode, and not until 2002 that the German government apologized to the gay community. This period still provokes controversy, however. In 2005, the European Parliament adopted a resolution regarding the Holocaust where the persecution of homosexuals was mentioned.
Since the 1980s, cities around the world have erected memorials to remember the thousands of homosexual people who were murdered and persecuted during the Holocaust. Major memorials can be found in Berlin, Amsterdam, Montevideo, and San Francisco.
The picture at the top shows a chart of the various badges for identifying prisoners in concentration camps. This includes the infamous pink triangle. The second picture show Amsterdam’s Homomonument. The inscription reads Naar vriendschap zulk een mateloos verlangen (Such an endless desire for friendship).
See also:
* History of homosexual people in Nazi Germany and the Holocaust
* Pierre Seel
* Déportation des homosexuels: le gouvernement souhaite une plaque commémorative
* One Day They Were Simply Gone, The Nazi Persecution of Homosexuals, Rictor Norton
* Memorial For Gay Victims of the Holocaust in Berlin
* Nazi Persecution of Gays 1933-1945 – United States Holocaust Memorial Museum
* The Nazi Persecution of Gays – Annotated Bibliography of Nonfiction Sources
Books
* Liebe Macht Frei: the biography of Janni Kowalski by Jeremy Harder, Old Forge Publishing
* The Pink Triangle: The Nazi War Against Homosexuals, Richard Plant, Mainstream Publishing
* The Men with the Pink Triangle: The True Life-and-Death Story of Homosexuals in the Nazi Death Camps, Heinz Heger. Gay Men’s Press
* I, Pierre Seel, Deported Homosexual, Pierre Seel, Basic Books.
* An Underground Life: Memoirs of a Gay Jew in Nazi Berlin, Gad Beck, University of Wisconsin Press
* The Other Victims: First-Person Stories of Non-Jews Persecuted by the Nazis, Ina R. Friedman, Houghton Mifflin Juvenile Books
* The Hidden Holocaust, Gunter Grau, Cassell