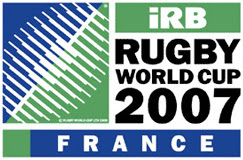 The world of sports is notoriously unwelcoming to LGBT people. However if a sport had to be singled out as being perhaps more friendly than other, Rugby Football would probably become a strong contender.

Of course there are no openly gay professional players but clubs like the London King’s Cross Steelers (The oldest gay rugby club, founded in 1995) have been largely accepted and the Rugby Football Union has been very supportive of the team. The RFU joined the Steelers and the Metropolitan Police last year to launch a poster campaign against homophobia.

Another step towards acceptance and visibility was taken earlier this week, when Nigel Owens entered the stadium in Lyon, France where he was going to make his debut as a World Cup referee for the Argentina v Georgia match.

The sixth Rugby World Cup started on 7 September and will last until 20 October. 20 nations will contest 48 matches over 44 days. Forty-two matches will be spread between ten French cities, with six matches held in the UK. Out of 12 referees, Owens is the only Welshman. He was appointed as an international referee in 2005.

In May 2007, he came out to the public in an interview with Wales on Sunday. He had previously come out to his family and boss via text-message. Although reactions have been generally positive, it was a difficult decision to make. He had even contemplated suicide.

“It’s such a big taboo to be gay in my line of work, I had to think very hard about it because I didn’t want to jeopardise my career. Coming out was very difficult and I tried to live with who I really was for years. I knew I was ‘different’ from my late teens, but I was just living a lie.”

But he believes things may have been easier had he been a player perhaps because referees tend to be the focus of fans’ resentment anyway.

In the meantime, three top players of the French XV team, Frédéric Michalak, Yannick Nyanga and Thierry Dusautoir have accepted to appear on posters for the French AIDS fighting charity Aides.

Michalak has appeared several times in the highly homoerotic pictures of the Dieux Du Stade calendars which have done so much for the popularity of Rugby with gay men in France (six amateur rugby clubs have been founded since 2004) and many other countries.

The Aides campaign consists of four posters and a video showing the players together or separately with slogans asking what would happen to them if they were HIV positive and playing on double-entendres between Rugby and social situations. Details and visuals of the campaign can be viewed here (French website).