The Edinburgh fringe festival is drawing to a close. Earlier this month, the cast of Rikki Beadle-Blair’s play Stonewall was nominated in the Best Ensemble category of The Stage Awards for Acting Excellence.
Beadle-Blair, who adapted the play from his 1996 screenplay of the same name, told Scottish magazine The List: “The perception is that gay rights have moved forward but it’s not far enough.
“Societal attitudes are obscured as gay people can walk down two streets in every capital holding hands without being beaten up, however gay teens are three times more likely to commit suicide and to kids (and a certain radio DJ) ‘gay’ is another word for ‘lame’.”
The Awards consist of categories for Best Actor, Best Actress, Best Ensemble and Best Solo Performer.
Nominations are chosen by the newspaper’s review team who view hundreds of productions before making their choice.
The Stage Awards for Acting Excellence were founded by the publication in 1995 to celebrate the best performances in theatre-based productions each year at the Edinburgh Festival Fringe.
The judging panel consists of the principal reviewers for The Stage at the Edinburgh Festival Fringe: Jeremy Austin, Gerald Berkowitz, Thom Dibdin, Duska Radosavljevic, Nick Awde and William McEvoy.
The play La Femme est Morte, or Why I Should Not F**k My Son, a contemporary reworking of the Greek myth of Phaedra, eventually won the award at a ceremony at the Cafe Hub, Castlehill, Edinburgh, on Sunday, August 26.
About the play 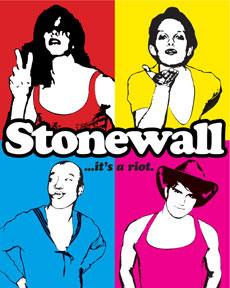 On June 28, 1969, a New York City gay bar underwent one of its regularly scheduled, almost ritualistic police raids.
For some reason on that night the queens fought back, beginning a week of riots and demonstrations that are celebrated as the beginning of America’s gay pride movement.
Rikki Beadle-Blair’s play celebrates the myth of Stonewall in a way that is true in spirit if fictional in plot, and that provides one of the most thoroughly entertaining dirty pleasures of the festival.
Set in a magical version of history in which the entire cast is covered head to toe in glitter, the play follows newcomer to New York Matty Dean, who falls for La Mirada, one of the drag queens who frequent the Stonewall.
More political than most, Matty is at first drawn to the cautious Mattachine Society’s way of working within the system until he sees how ineffectual and compromising they are, returning to the Stonewall world just as a cop picks exactly the wrong moment to hassle one of the queens.
With the romance of Matty and La Mirada at its centre, the play gets the chance to look at a cross-section of the 1969 gay world, from the most flamboyant of queens to the tragically closeted man who can’t face the fact that he loves one of them. It also celebrates the spirit of liberation by interrupting the action at regular intervals with lip-synched musical numbers set to the recordings of girl groups of the period.
Strong performances from Alexis Gregory as La Mirada, Joel Dommett as Matty, and the author-director as the gang’s spiritual den mother lead a large cast and set a tone that encompasses the real personal dramas and the spirit of liberation.
Stonewall has all the glamour of a drag queen’s dreams and all the sleaze of a morning after a night that was well worth it.
See Also:
* Edinburgh Fringe Festival
* Review in the Scotsman
* Interview of Beadle-Blair in the Guardian
* Rikki Beadle-Blair on Wikipedia
* Stonewall Riots