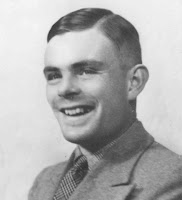 A statue of Alan Turing, was unveiled on Tuesday 19 at Bletchley Park. Turing was the inspirational mathematician at the heart of Bletchley Park’s codebreaking successes during World War II. Historians agree that the work of the codebreakers at Bletchley Park effectively helped to shorten the war by two years.
Alan Turing arrived at Bletchley Park, the site of secret British codebreaking activities during WWII and birthplace of the modern computer, in September 1939 and was soon pursuing his idea of building a machine that would break the Enigma key. He became head of the small Naval Enigma team in Hut 8 and contributed greatly to the breaking of the German Naval Enigma. By August 1940, Turing, together with his friend and colleague, Gordon Welchman, had brought the idea of an Enigma codebreaking machine to fruition with the construction of the Turing-Welchman Bombe, which speeded up the process of breaking into the daily Enigma keys. 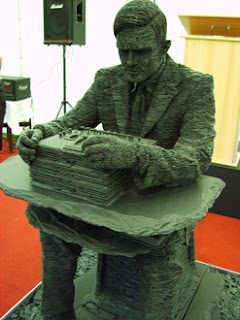 In 1952, Turing was convicted of having a sexual relationship with another man, to which he made no defence other than to say he saw nothing wrong in his actions. Turing was sentenced to a treatment that amounted to chemical castration. The conviction robbed him of his security clearance for GCHQ (Government Communications Headquarters, a British intelligence agency), for which he still worked, and made him the target for surveillance at the start of the cold war. He committed suicide by eating an apple laced with cyanide in 1954. The symbol of the half-eaten apple lives on to this day with the logo of the Apple MacIntosh computer.
Although Alan Turing received the OBE for his wartime achievements, he died having received no public recognition of the colossal contribution he made to the outcome of the war and the computer age that was to follow.
Before he died in January 2006, the late Sidney E Frank, an American billionaire, commissioned the internationally renowned sculptor Stephen Kettle to create a statue in memory of Alan Turing. Kettle’s pioneering work led to the world’s first stacked slate statue, which is permanently housed in the Science Museum in London. 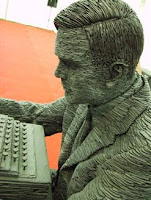 The one and a half ton, life-size statue of Alan Turing is made from approximately half a million individual pieces of five hundred million year old Welsh slate.
Simon Greenish, Director of Bletchley Park Trust, heralded the statue as a fitting and timely tribute to Turing. He continued, “Alan Turing is universally recognised as the founding father of the modern computer and one of the pre-eminent unsung intellectual warriors of the twentieth century. “With the help of the Sidney E Frank Foundation and the brilliance of sculptor, Stephen Kettle, Bletchley Park is now home to an exquisite and magnificent memorial to the genius of Turing.”
Bletchley Park
Milton Keynes MK3 6EB
www.bletchleypark.org.uk