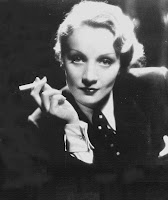 Marlene Dietrich’s bisexual exploits, her fondness for butch drag and her medal-winning heroism in the Second World War have added to the legend that has already enthralled several generations of gay men, stretching right back to Weimar Germany, where Marlene’s career began.
It was in the Berlin of the 1920s that the aspiring actress would be seen at the drag balls that were popular at the time. She found international fame with The Blue Angel and went on to make more than 50 other Hollywood pictures.
As Hitler came to power, Marlene was quick to realise that this was the twentieth century’s biggest monster, and she renounced her German nationality and became an American citizen. “If that is what being German involves,” she said, referring to the Nazi regime, “then I am no longer German”.
After the War she embarked on her third career as a cabaret artist. Her one-woman show, which she perfected with the help of Burt Bacharach, became a phenomenon, and she toured around the world with it for twenty years.
“Good Evening, Miss Dietrich”, hosted by the Gay and Lesbian Humanist Association (GALHA) and presented by Terry Sanderson, takes up the theme of this year’s Pride in London (“Icons”) and examines the varied and extraordinary life of this great entertainer who has a strong and lasting fascination among both gay men and women.
This tribute evening shows Marlene in her many guises. From her first screen test for von Sternberg, to a full performance of her famous show (recorded in 1963 by Swedish Television) the audience is taken on a trip through the 20th century to explore Marlene’s fantastic film career, her war work and her music.
Good Evening, Miss Dietrich
Thursday 28 June 2007, Conway Hall, London
website