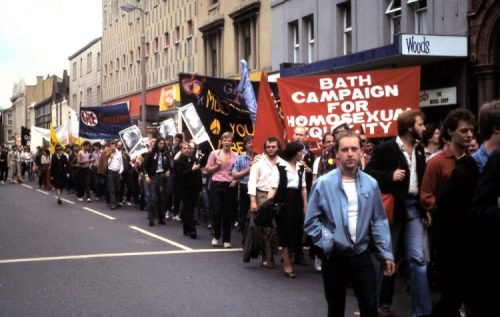 The UK’s first ever national Pride took place in Huddersfield on 4th July 1981* . To mark the fortieth anniversary, a series of arts and archive events will take place until autumn 2022. Part of these events is call-out from the West Yorkshire Archive Service (WYAS)* to anyone who attended or watched for photos, banners, posters, badges and flyers from the march.

WYAS will be holding the first of two Pride 81 Submission Days at Kirklees Archives’ new home in The Piazza Centre (opposite Huddersfield Library, HD1 2RS). The first is on Saturday 25th  September, 11am-4pm. Everyone is welcome to drop in to add their items to the archive, including the option to have items scanned and returned on the spot. As part of the project, the pictures will then be made available on-line free for anyone to view and will become a permanent part of the archives collection. There will also be a small exhibition of some of the existing items in the archive on Pride 1981 on the day.

In addition to this archive work, there will also be two arts strands to the project:

The events have been made possible by funding from the Arts Council of England, Kirklees Council and LGBT+ History Month UK. Social media for the project uses “#Pride1981”

Robert Clegg, Kirklees Archivist with WYAS, will be running the day. He says: “We do have some images of the Pride 1981 march, but there must be loads more out there. It’s an event of national historical importance. If you hold any items relating to the march then we’d love to see you on the 25th September. Please search your cupboards and attics to help us preserve this remarkable story for future generations! Your items will become a part of history and the celebration of this 40th anniversary.”

Stephen M Hornby* , Inkbrew Productions, will be writing some of the immersive show and will be present at the Archive Day to chat to submitters about their memories. He says:

“We’re delighted to be a part of this important project, restoring to Huddersfield the memory of an event of such importance. Huddersfield was the centre of the LGBT+ universe in 1981! Its such a shame that we don’t have more records of the event and this archive call-out is a great way to grow our knowledge of what happened and who was there. I’m hoping people will turn up not just with some photos, but with some great stories too, which might then become a part of the show.”