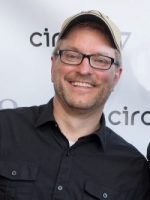 This piece on Rodney is from UMSL Daily, in 2015

Rodney Wilson was a graduate student at the University of Missouri–St. Louis when he proposed an idea that has since grown into an annual celebration in schools and cities across the country.

The founder of what is now known as Lesbian, Gay, Bisexual and Transgender History Month each fall, Wilson was also a history and government teacher at Mehlville High School in south St. Louis County at the time.

“I’m happy to say that UMSL was among the very first colleges and universities in the United States to hold a function, doing so that first October in 1994,” said Wilson, who earned his master’s degree in history from UMSL in 1995. “Professor Gerda Ray, other graduate students in the history department and I organized a film festival on the UMSL campus ­every Monday night that month.”

On a broader level, Wilson and a close friend took the lead on writing and sending a proposal to advocacy groups, movers and shakers, historians and a wide range of organizations across the nation leading up to that initial October commemoration. Their efforts paid off, and the annual observance continues to grow.

It was also during his years as a UMSL student that Wilson became the first openly gay K-12 teacher in Missouri.

“For many reasons, it became clear to me that I had to live an open life, not least of which was that LGBT History Month was beginning to emerge as a national celebration,” Wilson said. “How could I organize a national event about gay history and not be open at work about the entirety of who I am? I also believed that the greatest act of advocacy for civil rights for LGBT Americans is the act of coming out. It is a political act.”

Wilson’s intellectual understanding of his identity and LGBT history also evolved during his time as a student at UMSL, which he experienced as “a safe space for the study of all kinds of topics.”

“The Missouri History Museum published their first piece of LGBT history – an article I wrote as part of a larger paper in Professor Ray’s class,” he said. “It was titled ‘The Seedtime of Gay Rights: Rev. Carol Cureton, the MCC, and Gay St. Louis, 1969-1980.’”

After teaching in the St. Louis region for seven years, Wilson moved to Massachusetts, where he taught English to Spanish speakers as well as reading, writing and math to 17- to 21-year-old inmates in a local house of correction. He also managed an adult education program at a Massachusetts community college before returning to his home state of Missouri in 2011, where he now tutors and teaches history, government and comparative religion about an hour south of St. Louis.

He looks back at his time at UMSL as pivotal and remembers with appreciation the ways in which several of the history professors were “openly supportive” of his interests.

“It was a busy time for me, with coming out, organizing LGBT History Month, teaching fulltime and finishing my degree,” Wilson said. “I am grateful that Dr. Ray worked with me my final semester to make sure everything fell into place. I remember arriving at her office one morning to find that she had worked there the entire night finishing a manuscript. Her eyes were red and swollen. She was exhausted. But she found the time and energy to sit with me for over an hour as we discussed the work I was completing.”

Wilson shares more of his personal story and the roots of LGBT History Month in an Advocate article published earlier this month.

For information about campus events organized by PRIZM, Student Life and Counseling Services in recognition of the annual observance, click here. Upcoming highlights include PRIZM’s 12th Annual Drag Show on Oct. 8, an Oct. 12 presentation titled “From Marsha to Ricky: The Whitewashing of Stonewall” and a viewing of “Paris is Burning” documentary Oct. 20.