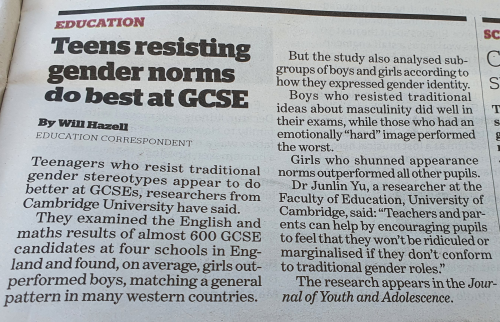 By Will Hazell (Education Correspondent)

Teenagers who resist traditional gender stereotypes appear to do better at GCSEs, researchers from Cambridge University have said.

They examined the English and Maths results of almost 600 600 GCSE candidates at four schools in England and found, on average, girls out-performed boys, matching a general pattern in western counties. But the study also analysed sub-groups of boys and girls according to how they expressed their gender identity.

Boys who resisted traditional ideas about masculinity did well in their exams, while those who had an emotionally ‘hard’ image performed the worst. Girls who shunned appearance norms outperformed all other pupils.

Dr Junlin Yu, a researcher at the Faculty of Education, University of Cambridge, said “Teachers and parents can help by encouraging pupils to feel that they won’t ve ridiculed or marginalised if they don’t conform to traditional gender roles.”

The research appears in the Journal of Youth and Adolescensce.