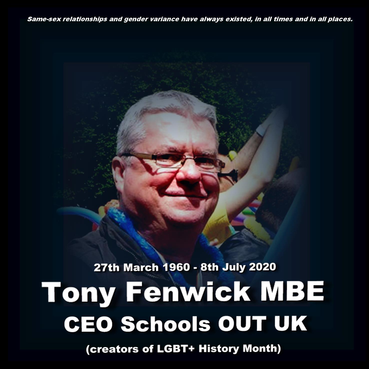 Tony Fenwick MBE, a lifelong trade unionist dedicated to education, justice for all and fair play for LGBT+ students and staff in schools, died earlier this month after a long period of illness.

He was a giant of the LGBT+ movement for over twenty years, serving for more than a decade as CEO of the tiny volunteer committee that runs education charity Schools OUT UK, alongside veteran activist Sue Sanders, its founder and Co-chair. Together they strived to promote and expand LGBT+ History Month (held every February since 2005), The Classroom and OUTing the Past. “Same sex attraction and gender variance have always existed, in all times and in all places,” he famously stated with typical unassuming unequivocalness.

Tony was awarded an MBE at the request of the Department for Education for his ‘services to equality in education’ in 2016, based on his volunteer work as CEO of Schools OUT UK, a co-founder of LGBT History Month. He spoke countless times at union events, LGBT+ History Month launches and Schools OUT UK conferences where “every time his passion shone through and … one learnt a little bit more”. Tony was one of those activists who was not necessarily known in the ‘popular’ media. He did not do what he did for personal recognition; he did it for the equality of everyone.

When he was offered the honour Tony said, “I am delighted and honoured to receive an MBE but I regard it as an award for all of us at Schools OUT UK who work as volunteers and give up our valuable time to make things happen. I have accepted the MBE as an acknowledgement that our work in education was being valued and that our work for schools was making an impact. But I also hope to use the gong to lobby Parliament to encourage the nations of the Commonwealth to get rid of the Empire’s outdated legislation and legalise same sex relations throughout their lands.”

“The world will be a little less bright without him but his role in the pursuit of social justice has left it a little more hopeful.”

A trained and experienced English teacher, Tony taught in many secondary schools and over the last decade provided individual tuition to children who were unable to attend school for medical reasons. It was a role he cherished and often talked about.

Tony represented Luton, his district, as the Equality Officer at the NUT (now the NEU) full conference for over twelve years. He was also on the LGBT+ Sub-Group for London East and South East region at the TUC.

His contributions to the unions are much celebrated. He was a founding member of the of the NUT LGBT+ structures and was a permanent feature at the Trade Union Council Annual LGBT+ Conference, often proposing motions that would have a constructive effect for LGBT members of all unions.

When the opportunity arose to support a fellow teacher, a bisexual man from Uganda who sought asylum here to escape persecution, he worked hard alongside our union colleagues over a protracted length of time to fight against his deportation. The case was won.

When the news of his death was announced, tributes came pouring in on Facebook:

“Always busy and always had time for you!”

“If you are an LGBT+ person in the UK, particularly if you are under the age of thirty, you will have benefitted from Tony’s work over the years, even if you didn’t know it.”

Kevin Courtney, Joint National Secretary of the NEU said, “Such a lovely man and yes, he has taught a lot of us so much.”

“A loyal, but thankfully, not uncritical friend. He has given so much and taught many of us that the world can be better.”

“Thinking of stalwart fighter for human liberation, Tony Fenwick, this weekend.
Tony has been a huge inspiration for LGBT educators and an astounding NUT/NEU activist.”

We at Schools OUT UK are grateful for the privilege of working with such a talented and patient person. He was blessed with several dyslexic team members so his skill with English was often much needed. He had a lovely dry sense of humour and was always ready with a story. Having had a chequered history with train journeys, to say the least, his story of how he very nearly missed getting into Buckingham Palace to receive his MBE was only one of many.

Tony subscribed to the Guardian because of his passion for justice and his addiction to its cryptic crossword. He was a fan of Countdown and cooking programmes, and honed his own cooking skills in Italy where he lived for a time with a former partner.

Tony is survived by his sister Cheryl, her husband Tom Fenwick-Brown, nieces Ashley and Sarah, Ashley’s husband Sandeep and great-nephew Ayush, whom Tony doted on. He loved spending Christmas with them in his native Newcastle. Those of us who have worked with him cherish his memory and we miss him sorely.

It was an honour to meet inspirational Tony

I was very sad to hear that Tony Fenwick MBE, LGBT History Month co-founder, has died.

Tony was also THE authoritative voice on gay matters in education. Schools OUT has been providing services to educational institutions for nearly half a century.

I have much to thank him for. During Gay* History Month 2010, he made a long, stressful journey from Luton to Chesterfield Library to encourage campaigning when I addressed an audience with readings from my novels. The presence of a national LGBT celebrity was a major boost and an honour.

Unfortunately, the event was marred by an elderly woman who entered to keep warm. Inadvertently, she cheerfully joined the photo shoot before the speech began – later demanding that all images with ‘the likes of you lot’ be removed. ‘I don’t want my photograph appearing with homosexuals.’

Angry but restrained, we were shocked at this appalling homophobia. Tony, a confident and consummate diplomat, diffused the tension with admirable skill. He was calm. He interrupted her rage and, with a smile, politely gave an assurance that her image would be deleted. I would have recommended an MBE for that tact alone!

His generous support for my campaigning has been useful and appreciated, together with all the hard work he and his excellent team have done for the gay community.

*please note – February has never been called ‘Gay’ History Month. It started as LGBT HM in 2005 and was tweaked to become LGBT+ HM in early 2019.

Please consider donating to the Go Fund Me page set up by the NEU in Tony’s memory.

Schools OUT UK is an organization that works to educate out prejudice against all people, especially those in the Lesbian, Gay, Bisexual, Trans and other related communities.  It has sponsored and supports:

The Classroom, (www.the-classroom.org.uk) a website that contains over 80 lesson plans that ‘usualise’ LGBT issues across the curriculum for all ages;

OUTing the Past (www.outingthepast.com) an annual festival of LGBT+ History.