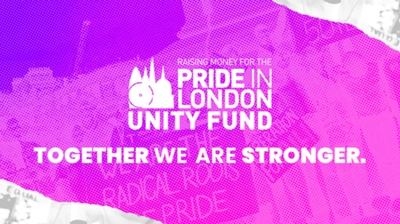 With many LGBT+ activists and organisations facing growing pressures in the current climate, Pride in London is launching a new funding initiative today – the Unity Fund – to raise money for grassroots LGBT+ groups across the country.

The new fund will provide grants to those who need it most, with the aim of tangibly changing the lives of marginalised LGBT+ people in the UK for the better. Additionally, thanks to Pride in London’s ongoing partnership with Facebook, all contributions to the fund will be matched pound for pound up to the value of £25,000 – thereby doubling the power of any initial donations. This is part of Facebook’s continued commitment to supporting grassroots communities and nonprofits that focus on the most disadvantaged members of society.

As well as inviting donations to the Unity Fund from individuals and businesses, Pride in London and its partners will be hosting a series of community-led fundraising events throughout June. From weekly fitness classes to pub quizzes, bingo and karaoke, all proceeds from these events will contribute to the Unity Fund – helping to address the needs of LGBT+ people, and also support Pride in London’s vital work. Sales from Pride in London merchandise, which is available online from 1st June, will also go towards the new fund.

Pride in London is also launching its first ever Pride Tri challenge, where rainbow-clad participants can get physical and complete a dry triathlon all from their own home and local neighbourhood. Prizes will be awarded for the top fundraisers as well as the best-dressed individuals and groups.

Alex Talcer, Director of Fundraising for Pride in London, said: “With pressures faced by marginalised groups now greater than ever, we’re rallying our communities to come together and show their support for one another. That’s why I’m so proud to launch our new Unity Fund, which will make a real difference to the lives of LGBT+ people across the UK. But we need your help – by supporting Pride in London you’ll not only be helping us but also helping us grow our Unity Fund for those who need it most.”

Christopher Joell-Deshields, Director of Community Engagement for Pride in London, said: “Our queer history reminds us that in moments of crisis, LGBT+ people have to stand in solidarity with one another – because we’re stronger together. Now more than ever, marginalised groups such as our queer black communities and trans communities need your support in order to access the same hard-won rights that others have. Whether you can make an individual donation or take part in one of our events, every penny raised will make such a positive impact.”

The Unity Fund is part of Pride in London’s ongoing commitment to provide a platform to unite, support and celebrate LGBT+ communities, amplifying their voices and allowing people to lift each other up and stand as one. This follows the launch of the organisation’s 2020 campaign You!Me!Us!We!, which calls on all communities to show allyship to one another.

For more information or to donate to the Unity Fund, visit: prideinlondon.org/unity-fund
To find out more about Pride in London’s upcoming fundraising events, visit: www.bigmarker.com/prideinlondon.