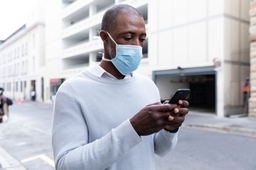 According to the NHS, the COVID-19 app, currently only available in the Isle of Wight, works by using Bluetooth on phones to “record the distance between other phones that also have the app installed”.

It added: “If you become unwell with symptoms of coronavirus, you can allow the app to inform the NHS.

“This will trigger a notification that the NHS will then send anonymously to all other app users who you’ve been in significant contact with over the previous few days.

“Affected app users will be sent official NHS advice on what to do next.”

Contacting tracing is widely accepted as an effective way to curb the spread of coronavirus, but democracy advocate Kyle Taylor, of Fair Vote UK, told Forbes that the way the NHS app works could have serious consequences for LGBT+ rights in the future.

The problem, said Taylor, is that the NHS has created a centralised, instead of a decentralised app.

Taylor added that although the NHS has assured users that their information will be held anonymously, and can be deleted if requested, because the data set is in one place it could be be reverse engineered to relink historical data to users.

He said: “We may have protections now, but human rights can be eroded quickly.

“If a centralised server becomes a reality and retains information–potentially forever–it could be used by a later government who aren’t as friendly towards LGBT people.”

Taylor continued: “If you want to know if you should worry about these plans? Let me tell you now, this is bad… I wouldn’t use a centralised app, because there is no justification for it to be centralised.

“The thinking is, this will be the most incredible set of data imaginable. We already give too much to social media, our friends, what we like, and location data.

“Considering around every 14 – 21 days, you repeat the people and places you see; with the quality of data the NHS centralised app will gather, alongside social data–it means within three weeks you could map someone’s entire existence.

“No one should have that information except for you. It’s an extremely threatening data set and could be used to control and undermine us.”

“The idea of submitting your location and other sensitive material to a centralised system naturally raises a lot of concern for LGBT individuals.

“Many queer people need to safeguard their information about where they have been and who they interact with for their own protection.

“This, coupled with pre-existing anxieties around big data and its misuses, means that a large number of LGBT people simply won’t download the app.”

An NHSX spokesperson told PinkNews: “The NHS COVID-19 app has been designed to protect users’ privacy while tackling the spread of infection and could be a key tool to help Government manage the pandemic and save lives.

“It does not track location or store any personal information; the app only asks for the first half of a user’s postcode.”