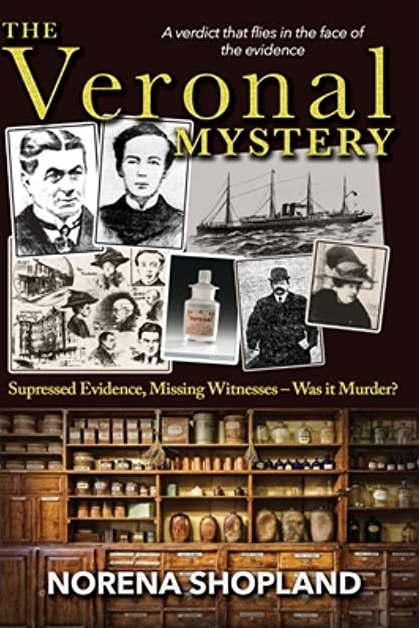 If you are interested in LGBT+ history and court cases this may be the book for you.

Norena has done a meticulous job of following evidence, reading archives and newspapers of the time, to piece together a fascinating story of the lives of two men; Eric Trevanion and Albert Roe, and the death of Eric in the early part of the 20th century. The detailed descriptions of life and attitudes of the time around class and homosexuality feel like we are on another planet, not just over a hundred years ago. Norena takes us on a journey over 6 months from the first Inquest on Eric’s death on the 12th September 1912 through to the conclusion of the second inquest in February 1913. With flash backs, as it were, to both men’s lives.

The case to be answered is how Eric died – was it by his own hand deliberately or by accident using drugs or due to someone else administering an overdose?

Norena gives us a clear picture of how people with money, (Eric was very wealthy when he came of age, inheriting about £9 million in today’s money) could easily obtain drugs. Veronal was not an illegal drug and Norena weaves in stories of other cases where the use of the drugs has ended up in court, attempting to discover how the deceased died.

Eric cuts an interesting figure; highly privileged, highly strung, well-traveled and clearly a lover and buyer of very expensive beautiful things. He presents as somewhat effeminate and lonely, so easy prey to people who might see him as a cash cow.  He does not appear to have have many friends and depends on people, who he pays for their services. His frequent use of drugs, both morphine and Veronal, put him in a very vulnerable position. When Eric dies, aged only twenty-five he is also quite young and inexperienced.  The need to hide one’s homosexuality at the time was extremely stressful. We are looking at a time when Oscar Wilde’s death had been only 12 years before.

Albert meets Eric in 1906, it would seem on a sea voyage, when he was depressed and feeling neglected by his travelling companions.  I say’ it would seem’ because Norene’s painstaking attention to detail has unearthed many ‘facts’ that are not well corroborated and sometimes contradicted.

Albert is a determined man who has made his way up the ladder in merchant shipping, gaining his Extra Master Certificate in 1905, meaning he could captain a foreign going ship. His family had had many brushes with the law and clearly were struggling financially. Albert is 34 when Eric dies.

Eric’s gratitude to Albert for taking care of him on that voyage eventually leads to Eric paying Albert to be a companion then buying an apartment in Brighton and lavishly decorating it. They have only been in the apartment a very short time when Eric is found dead.

Eric’s family, due to their wealth and his mother’s infamous divorce from, then remarriage to his father, all highly unusual for the time and much recorded in newspapers, means Eric’s death is a matter of extreme interest.

The first inquest takes place in the very apartment Eric dies in, and though his mother thinks it is a case of murder and initially asks for an autopsy, her other sons dissuade her and the jury do not request it, so a verdict of death by misadventure is returned.

What Norena does in the book is give us a very detailed description of the second inquest called after Eric’s mother Florence Trevanion instructs her solicitors to write to the public prosecutor asking how a jury could come to a verdict of overdose when they did not know the quantity of drugs in Eric’s system. The Public Prosecutor agrees and orders an exhumation of the body and a post-mortem.

The level of detail she gives us is phenomenal and I must admit I did drown in it occasionally, with twenty witnesses over 7 days, it was a mammoth undertaking. It was a top story with all the national papers covering it.

There are two potential scandals in the story, firstly the possibility of Eric committing suicide, which was at that time illegal and seen as a sin. The body of a person who took their own life was not allowed to be buried in sanctified ground. And with regards to the possibility of a homosexual relationship between Eric and Albert, throughout the case, Norena shows us the ambivalence of the barristers to particularly nail the latter. It is more than probable that Eric’s brothers had not wanted to support their mother in her accusation of murder, as they had no desire to put the family through a potential scandal about Eric’s sexuality or his being seen as committing suicide.

The book is a journey into attitudes and prejudices of the time. Illuminating on class, drugs and sexuality. Norena introduces us to other stories from both the heterosexual and LGBT+ worlds and by the times you finish the book, you have a much clearer picture of the atmosphere of the times.

The index of the book is definitely worth noting and it is meticulous and points you to many valuable and useful resources for those of you who want to do more research on this and similar cases. I commend Norena’s dedication and ability to handle a very complex story. I will however not spoil your read and tell you the outcome of the second inquest.