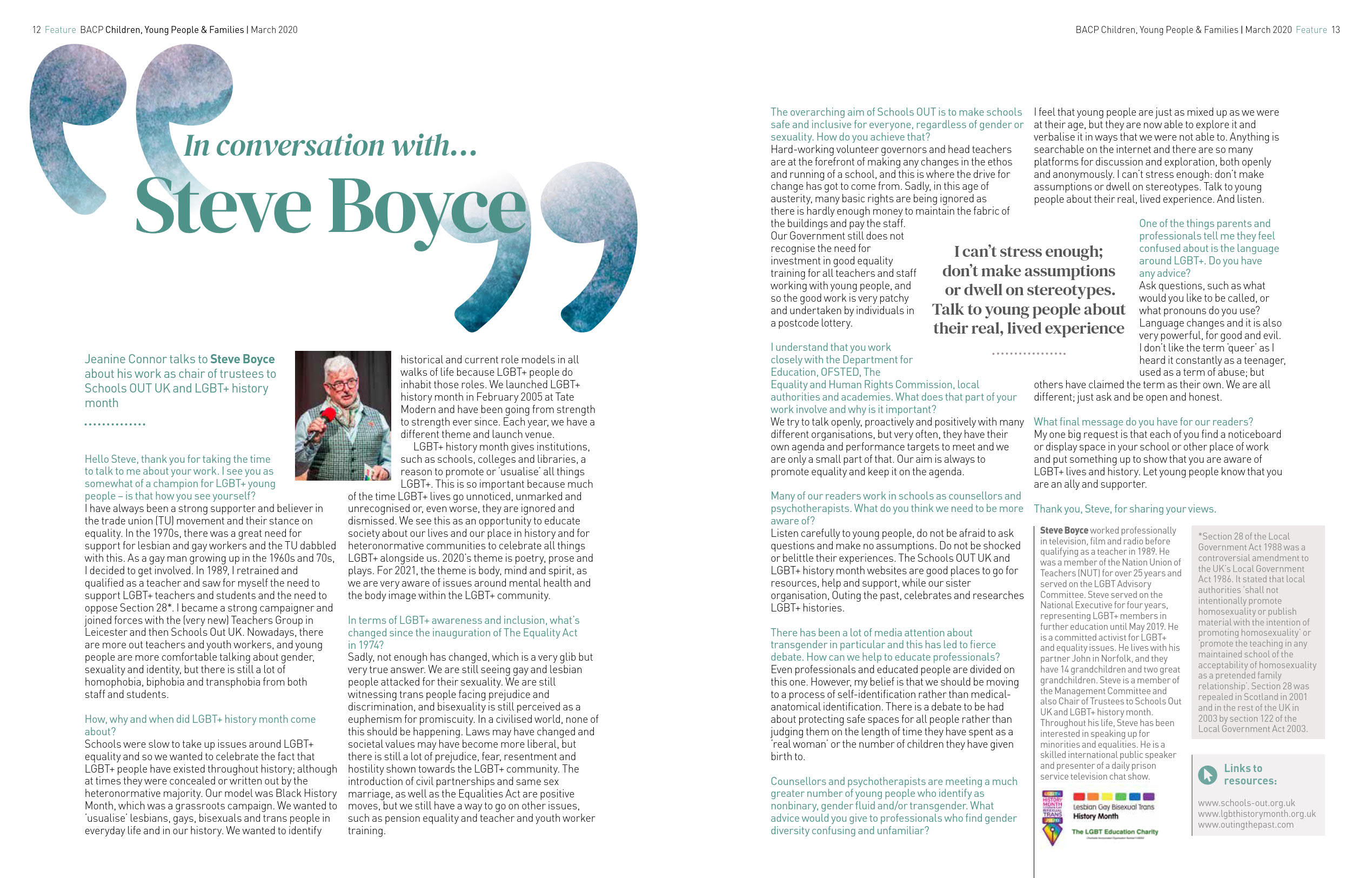 Jeanine Connor of BACP Children, Young People & Families talks to Steve Boyce about his work as chair of trustees to Schools OUT UK and LGBT+ History Month

Hello Steve, thank you for taking the time to talk to me about your work. I see you as somewhat of a champion for LGBT+ young people – is that how you see yourself?

I have always been a strong supporter and believer in the trade union (TU) movement and their stance on equality. In the 1970s, there was a great need for support for lesbian and gay workers and the TU dabbled with this. As a gay man growing up in the 1960s and 70s, I decided to get involved. In 1989, I retrained and qualified as a teacher and saw for myself the need to support LGBT+ teachers and students and the need to oppose Section 28*. I became a strong campaigner and joined forces with the (very new) Teachers Group in Leicester and then Schools Out UK. Nowadays, there are more out teachers and youth workers, and young people are more comfortable talking about gender, sexuality and identity, but there is still a lot of homophobia, biphobia and transphobia from both staff and students.

How, why and when did LGBT+ history month come about?

Schools were slow to take up issues around LGBT+ equality and so we wanted to celebrate the fact that LGBT+ people have existed throughout history; although  at times they were concealed or written out by the heteronormative majority. Our model was Black History Month, which was a grassroots campaign. We wanted to usualise’ lesbians, gays, bisexuals and trans people in everyday life and in our history. We wanted to identify historical and current role models in all walks of life because LGBT+ people do inhabit those roles. We launched LGBT+ history month in February 2005 at Tate Modern and have been going from strength to strength ever since. Each year, we have a different theme and launch venue. LGBT+ history month gives institutions, such as schools, colleges and libraries, a reason to promote or ‘usualise’ all things LGBT+. This is so important because much of the time LGBT+ lives go unnoticed, unmarked and unrecognised or, even worse, they are ignored and dismissed. We see this as an opportunity to educate society about our lives and our place in history and for heteronormative communities to celebrate all things LGBT+ alongside us. 2020’s theme is poetry, prose and plays. For 2021, the theme is body, mind and spirit, as we are very aware of issues around mental health and the body image within the LGBT+ community.

In terms of LGBT+ awareness and inclusion, what’s changed since the inauguration of The Equality Act in 1974?

Sadly, not enough has changed, which is a very glib but  very true answer. We are still seeing gay and lesbian people attacked for their sexuality. We are still witnessing trans people facing prejudice and discrimination, and bisexuality is still perceived as a euphemism for promiscuity. In a civilised world, none of  this should be happening. Laws may have changed and societal values may have become more liberal, but there is still a lot of prejudice, fear, resentment and hostility shown towards the LGBT+ community. The introduction of civil partnerships and same sex marriage, as well as the Equalities Act are positive moves, but we still have a way to go on other issues, such as pension equality and teacher and youth worker training.

The overarching aim of Schools OUT is to make schools safe and inclusive for everyone, regardless of gender or sexuality. How do you achieve that?

Hard-working volunteer governors and head teachers are at the forefront of making any changes in the ethos and running of a school, and this is where the drive for change has got to come from. Sadly, in this age of austerity, many basic rights are being ignored as there is hardly enough money to maintain the fabric of the buildings and pay the staff. Our Government still does not recognise the need for investment in good equality training for all teachers and staff working with young people, and so the good work is very patchy and undertaken by individuals in a postcode lottery.

I understand that you work closely with the Department for Education, OFSTED, The Equality and Human Rights Commission, local authorities and academies. What does that part of your work involve and why is it important?

We try to talk openly, proactively and positively with many different organisations, but very often, they have their own agenda and performance targets to meet and we are only a small part of that. Our aim is always to promote equality and keep it on the agenda.

Many of our readers work in schools as counsellors and psychotherapists. What do you think we need to be more aware of?

Listen carefully to young people, do not be afraid to ask questions and make no assumptions. Do not be shocked or belittle their experiences. The Schools OUT UK and  LGBT+ history month websites are good places to go for  resources, help and support, while our sister organisation, Outing the past, celebrates and researches  LGBT+ histories.

There has been a lot of media attention about transgender in particular and this has led to fierce debate. How can we help to educate professionals?

Even professionals and educated people are divided on this one. However, my belief is that we should be moving  to a process of self-identification rather than medical- anatomical identification. There is a debate to be had about protecting safe spaces for all people rather than judging them on the length of time they have spent as a ‘real woman’ or the number of children they have given birth to.

Counsellors and psychotherapists are meeting a much greater number of young people who identify as non-binary, gender fluid and/or transgender. What advice would you give to professionals who find gender-diversity confusing and unfamiliar?

I feel that young people are just as mixed up as we were at their age, but they are now able to explore it and verbalise it in ways that we were not able to. Anything is searchable on the internet and there are so many platforms for discussion and exploration, both openly and anonymously. I can’t stress enough: don’t make assumptions or dwell on stereotypes. Talk to young people about their real, lived experience. And listen.

One of the things parents and professionals tell me they feel confused about is the language around LGBT+. Do you have any advice?

Ask questions, such as what would you like to be called, or what pronouns do you use? Language changes and it is also very powerful, for good and evil. I don’t like the term ‘queer’ as I heard it constantly as a teenager, used as a term of abuse; but others have claimed the term as their own. We are all different; just ask and be open and honest.

What final message do you have for our readers?

My one big request is that each of you find a noticeboard  or display space in your school or other place of work and put something up to show that you are aware of
LGBT+ lives and history. Let young people know that you  are an ally and supporter.

Thank you, Steve, for sharing your views.