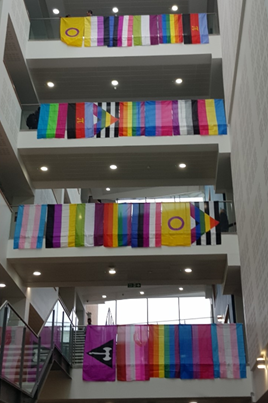 LGBT History Month at Westminster Kingsway College
February 2019
To celebrate LGBT History Month, Student services organised a range of activities across the month of February. We started off wiht an injection of colour into the Kings Cross Atrium. Pride flags lined the balconies whilst the stairs were transformed into a rainbow of sexuality and gender identities. Lining the stairs were posters of LGBT role models and the Atrium was filled with LGBT timelines, posters and information.
The LGBT Society organised a stand in the Atrium selling LGBT badges, LGBT cupcakes, and offering help and advice to students. We organised an LGBT selfie stand and in collaboration with the Digital Photography Cub where we took pictures of students in a booth with a rainbow background. In addition, a number of LGBT films were shown. Members of the student LGBT Society collected a series of interviews with students and staff to gather their experiences and stories of identifying as LGBT or being an ally. LDD students prepared rainbow cakes to sell in their weekly coffee afternoon.
The co-founder of LGBT History Month, Sue Sanders, came to speak to the students and staff with a talk called Pride and Prejudice. We were educates on the discrimination LGBT communities have faced throughout history and the progress which has been made. In addition to Sue Sanders, a member of the East London Out Project visited the Victoria Centre and held a series of workshops.