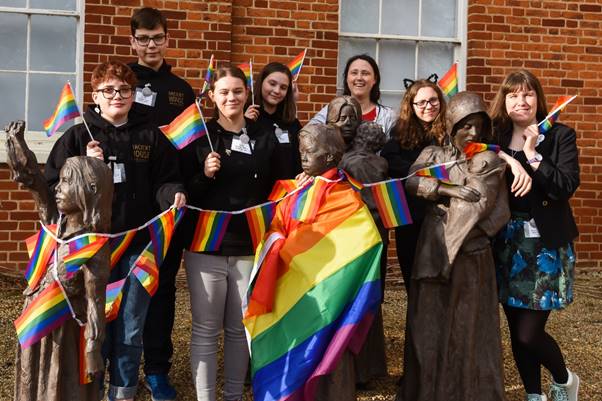 To celebrate LGBT History Month Ancient House’s Teenage History Club went ‘on the road’ to queer the collections at Gressenhall Farm and Workhouse, near Dereham on 20 February and Lynn Museum in Kings Lynn on 22 February. The tours build on the teens Rainbow Pride Project and Pride of the People: Helping History Out of the Closet exhibition. The project came out of a discussion at one of the sessions of the museum’s weekly Teenage History Club. The young people were shocked to discover homosexuality was illegal until 1967. The group requested a project to explore what life was like for non-heterosexual people in the past in the local area. The project has particular appeal as some of the group identify as LGBTQ+ or queer. The young people have been working on the project since September 2017.

The teen queer historians used a technique learnt from the V & A LGBTQ+ Tours and recently adopted by the Cambridge University Museums.

An object or story can be considered queer if it falls into one of the following categories:

Here queer is used as an umbrella term for all sexual orientations falling outside cis-gender heterosexuality.

Melissa Hawker, Learning Officer and Teenage History Club co-ordinator said: “Museums often think they don’t have any queer objects or queer stories – but they are there. We are so confident about this that the teenagers’ will be researching and delivering the tours all in one day and we will only feature items already on display.”
The quality of Teenage History Club’s work has been recognised by others in the museum sector. The V & A LGBTQ+ Tours are co-ordinated by Dan Vo, Museum Association Radical Change Maker who called Teenage History Club his ‘favourite historians”. The Queerseum campaign said: “Keep up the amazing work you’re doing on your Queer Tours.” Professor Richard Sandell said: “It was inspiring to meet you and see your ground breaking work.”
LGBT History Month is a month-long observance of lesbian, gay, bisexual, transgender and queer history, as well as a means of raising awareness for the issues faced by LGBTQ+ people. This year’s theme is Peace, Activism and Reconciliation.
The month was originally started in the US in 1994 to coincide with National Coming Out Day. It was taken up in the UK in 2005 by teachers Sue Sanders and Paul Patrick as part of the Schools OUT UK project. Schools OUT is the thirty two year old organization – originally called the Gay Teachers’ Group – that works for LGBT equality in education. By working in education in its widest sense and with school curricula in particular, they recognised that LGBT lives were hidden, disguised or ignored. They felt that this could only encourage the ignorance and prejudice that all their work seeks to challenge and therefore the creation of the LGBT History Month UK was an extension of that work.
The month of February has been dedicated to LGBT History Month in the UK since it began in 2005, despite the celebration taking place in October in the US. February was chosen to coincide with the abolition of Section 28. Section 28 prohibited local authorities to “intentionally promote homosexuality”. Section 28 was repealed in 2003. This means the members of Teenage History Club are the first generation whose education has not been under Section 28.
The Out of the Closet Tours join over 1,500 events are taking place across the country for LGBT History Month. This project follows on from Pride of the People: Helping History Out of the Closet exhibition which Teenage History Club curated which was displayed at Ancient House in autumn 2018 and accompanying events programme.The tours were well received. At Gressenhall students from the Sainsbury Institute of Japanese Arts and Culture Winter Programme attended the tour and said: Massive thank you for today – it was amazing! THC were awesome and so brave!” At Lynn Museum it was wonderful to see Stephen Boyce, Chair of Trustees for LGBT History Month on both tours!
Look out for the touring version of Teenage History Club’s Pride of the People exhibition coming to a venue near you soon.