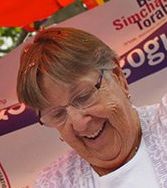 Game-changing activist Connie Kurtz, a subject (along with her wife, Ruth Berman) of the 2002 documentary Ruthie and Connie: Every Room in the House who famously sued the New York City Board of Education for domestic-partner benefits in the late 1980s, died Sunday at 81 in her home in West Palm Beach, Fla., following a long illness, according to Gay City News.
Born in Brooklyn in 1936, Kurtz was initially married to a man, and she moved to Israel in 1970 with her husband and family. She spent four years there before returning to the United States, where she rekindled a friendship with her old friend Berman. The pair fell in love, divorced their husbands, and carved out a life for themselves, eventually legally marrying in New York in 2011.
In 1988 Berman was working at New York City’s Sheepshead Bay High School, where she was a guidance counselor and physical education teacher. But because they couldn’t marry, Berman could not carry Kurtz on her health and insurance benefits. The couple sued for domestic-partner benefits to the tune of $1 million,  landing them appearances on The Phil Donahue Showand Geraldo to discuss the case and equal rights.
When members of the audience at The Phil Donahue Show criticized Kurtz and Berman for failing to remain quiet and closeted, Kurtz replied to one openly homophobic white woman, “We are forced to literally say, ‘We’re here and we’re standing tall and you better recognize us.’” Their suit eventually resulted in domestic-partner benefits for all New York City municipal employees.
Lifelong activists, Kurtz and Berman went on to found branches of PFLAG in New York and Florida. In 2000 they became cochairs of the Lesbian Rights Task Force of the New York State Chapter of the National Organization for Women, according to Gay City News.
Rabbi Sharon Kleinbaum, friend and rabbi to Kurtz and Berman,  officiated the women’s 2011 wedding ceremony and also a religious ceremony they held in 2000 when same-sex marriage was not yet legal anywhere in the United States.
“Connie was a force of nature. Everyone who encountered her — even for the first time and even briefly — felt her passion, her love, her fierceness, and her humor,” Kleinbaum said upon Kurtz’s passing. “Connie and her love Ruthie changed the world and never lost the love of life, of art, and of all of her people. I am sending my love to Ruthie and all who are in grief over this terrible loss. A great light has gone out in our world. May her memory forever bless us and may our lives be forever a blessing to her memory.”
A leader in LGBT activism for decades, Kurtz didn’t show signs of slowing down with age. Kurtz and Berman were honored with SAGE’s (Services and Advocacy for GLBT Elders) Pioneer Award. They also founded The Answer Is Loving Counseling Center in their hometown of West Palm Beach. The couple worked there for 20 years.
If Kurtz’s history of fighting for LGBT rights and recognition weren’t enough during her lifetime, SAGE introduced federal legislation to aid LGBT elders that the organization named the Ruthie and Connie LGBT Elders Act, which if passed would help carry on her legacy while helping to improve the lives of others.
Kurtz remained active, taking up causes for LGBT people, women, and for people of color with Black Lives Matter. She also became passionate about painting in the mid-’90s, according to Gay City News.
“Words can’t explain how sad we are that Connie has passed. We send our love and condolences to Ruth,” SAGE CEO Michael Adams said. “And we celebrate and honor Connie’s fierce and passionate legacy, which has made the world a better place for so many of us.”
Rabbi Kleinbaum officiated Kurtz’s funeral today at Star of David Cemetery of the Palm Beaches in West Palm Beach.
https://www.advocate.com/women/2018/5/30/pioneering-lesbian-activist-connie-kurtz-dies-81