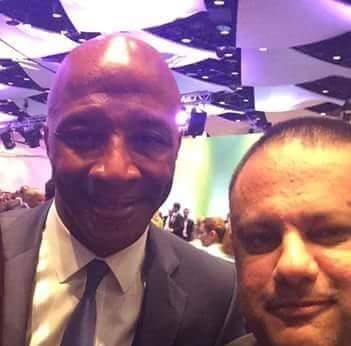 by Darryl Telles, a gay BAME football fanatic who and author of “We’re Queer And We Should Be Here – The Perils And Pleasures Of Being A Gay Football Fan” a book about being such. This is his appreciation of the contribution Cyrille Regis made to challenging prejudice in football.
Cyrille Regis who died today at the age of 59 was a pioneer in the world of football. Along with Lawrie Cunningham and Brendan Batson, he was pivotal to the success of West Bromwich Albion in the 1970s. But he was far more than just a top class striker, he was black and in the 1970s was one of a handful of players from an African or Caribbean background plying their trade at the summit of the English football pyramid.
It’s difficult now to imagine the climate of hatred and fear that Black players had to endure just a generation ago, if we didn’t still have the evidence of the television coverage to see before our very eyes. It came about in 1978 whilst Regis was playing for Albion at Old Trafford against Manchester United, that the shocking racist abuse and chanting could no longer go unreported. The tv coverage of the match is a hard watch. Thousands of supporters were racially insulting and abusing the three West Bromwich black players. Racism was called out for the first time by the commentator on the day, however it would take at least another decade and more, before this began to be addressed.
Worst was to come for Cyrille when he made his debut for England in 1982. He was sent in the post a bullet. He was only the third black player to wear an England shirt and he used the incident as motivation to further his career. Never giving in to the bullies, he won an FA Cup winners medal in 1987 when playing for Coventry City. He would later play for Aston Villa and Wolves and if you talk to any football supporter Regis is a legend known for his kindness, commitment and scoring goals: most famously when winning the BBC Goal of the Season competition in 1982.
After ending his playing days he became an ambassador for the Kick it Out anti-discrimination campaign. It was at their 21st anniversary dinner that I was at a loss of words when I met the gentleman. Recognition came late with the honour of an MBE but for every anti-racist he’s acknowledged as one of the first quiet giants in the game who didn’t let the catcalls and bananas stop him playing the game he loved. Because of him, hundreds of others have been able to climb on his shoulders and become proud black professional footballers. A memorial statue of Regis and his two other colleagues at West Bromwich is planned and long overdue.
Darryl Telles was one of the first members of the Gay Football Supporters Network in 1989 and has written his memoir of challenging racism and homophobia in football this year. He will be reading from his book “We’re Queer and we should be here” during LGBTHM Outing the Past festival at the Bishopsgate Institute on February 29th.